You know that white substance in your potting soil? Here’s a hint: It’s not expanded polystyrene (styrofoam).  It’s expanded perlite.  So, what’s perlite? 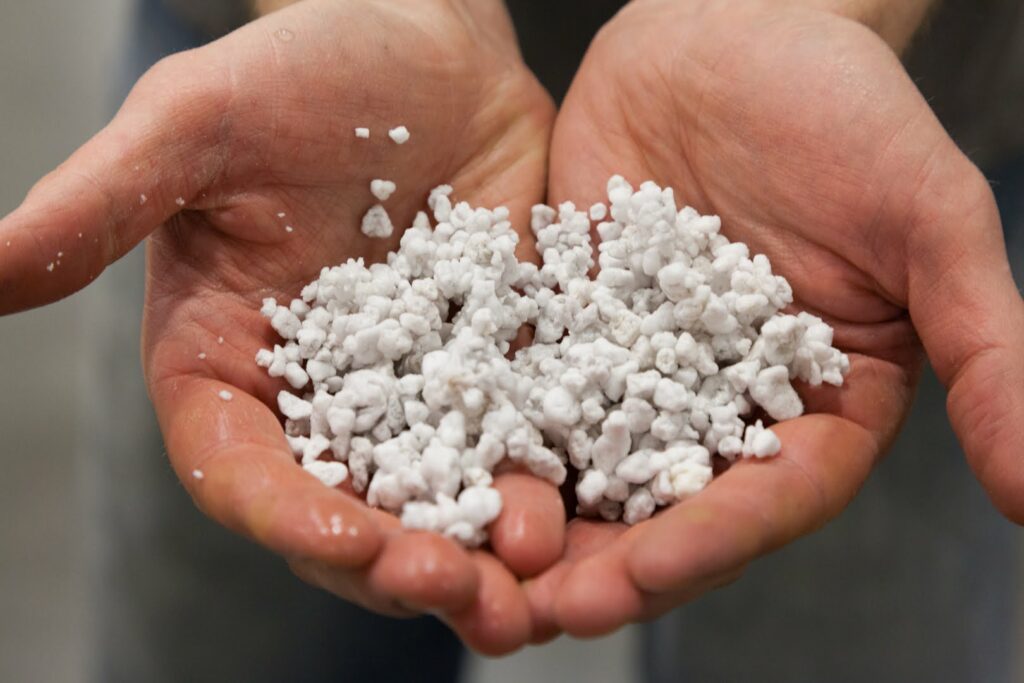 Perlite is an amorphous volcanic glass (SiO2) that has relatively high water content, typically formed by the hydration of obsidian. Perlite has the unusual characteristic of expanding and becoming porous when it is heated. It can expand to as much as twenty times its original volume. Expansion occurs when the glassy lava rock is heated to 1600 degrees F (871 degrees C) and the water molecules trapped in the rock turn into vapor causing the rock to expand. (This is the same principle as the water in popcorn that causes the kernel to pop when it is heated.) Before it is expanded, perlite is commonly gray, but can also be green, brown, blue or red. After it has been heated, perlite is typically light gray to white.

Perlite is a versatile and sustainable mineral that is mined and processed with a negligible impact on the environment. The green community recognizes perlite-enhanced products as a high-performance solution drawn from a natural material of nearly unlimited supply throughout the world. When perlite ore is expanded by exposure to rapid, controlled heating, it grows up to 20 times its original volume and takes on a foam-like cellular internal structure—essentially clusters of microscopic glass bubbles.

So, who cares about Perlite? You do almost every day. Perlite is plays key roles in specific applications to the Horticulture, Construction, Insulation, Filtration, and Industry. Learn more about perlite and it’s many versatile applications at http://agperlite.com or read about the Perlite Expansion Facility Keller engineered for AGP.